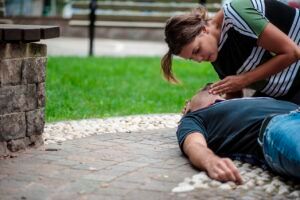 Property owners have a duty to ensure that their premises are safe for visitors. This includes taking steps to prevent a patron or employee from physically assaulting another person. At Mary Alexander & Associates, P.C., our San Francisco physical assault lawyers focus exclusively on personal injury law, and have done so for more than 30 years. Please speak to our firm today if you suffered serious injuries from a physical attack on another’s property.

Call today to schedule a consultation with an experienced premises liability attorney for assistance.

Proving a History of Violence

In order to hold a business or property owner accountable for the assault you have suffered, you will need to prove that they were negligent. You can do this in a number of different ways. One option is to prove that the establishment had a history of violence. By showing that an establishment has dealt with many violent incidents in the past, you can prove that they should have created a better security plan due to the clear and repetitive risks posed to their patrons.

Looking into an establishment’s history is fairly easy. One strategy is to simply speak to the police and ask for reports that have been filed in connection with the establishment. You may discover that the police have been called to the property dozens of times within the past year, showing a clear and obvious pattern of violent incidents.

However, it is not always enough to show that there has been a pattern of violent incidents at the establishment. In order to give yourself the best possible chance of success, you must show that there were past incidents that closely mirrored your own experience. For example, you might have suffered an assault in the parking lot of a bar. You might then look into police reports and discover that there have been multiple assaults within the past year at that same bar. However, the bar might argue that all of these past assaults took place inside the actual building, and that they could not have reasonably prepared for assaults in the parking lot, since this kind of incident was completely out of the ordinary.

That being said, showing that the establishment had a clear history of violent incidents is an effective strategy for injured plaintiffs, as it proves that the owners and managers were aware of these incidents and yet did nothing to address the clear pattern.

The Type and Nature of the Establishment

Even if no prior violent incidents have occured, you may still hold an establishment liable by showing that they should have had a better security plan due to the specific type and nature of their business. In other words, there are some businesses that seem to attract criminals, and these businesses should be expected to create an effective security plan to deal with the potential threat.

There are a number of businesses that might fall into this category. These include casinos, night clubs, strip clubs, bars, concert venues, late-night fast food restaurants, and many others. Generally speaking, whenever liquor and money are flowing freely late at night, there is a potential for violence and criminal activities.

If you were injured at one of these establishments due to inadequate security, it may not be necessary to show that there was a past history of violent incidents (although that would certainly help). Due to the nature and character of the establishment, it might be enough simply to show that the business attracted criminals and violent individuals. As a result, you can argue that the business owners and managers should have done more to combat the inevitable threat of violent behavior.

The Neighborhood of the Establishment

Another way to prove negligence is to highlight the inherent dangers associated with the surrounding neighborhood of the establishment. If someone sets up a new business in a high-crime neighborhood, they are expected to set up an adequate security plan of some kind. The obvious risks of doing business in such a neighborhood are often enough to warrant a considerable security system – even if the type and character of a business is not considered inherently dangerous.

For example, an ice cream shop might open in one of the most crime-ridden neighborhoods of San Francisco, such as the downtown area, Mission, or Bayview. This business owner should expect the odd violent incident, especially if they operate late at night. If someone becomes injured due to one of these violent incidents, they may have the potential to sue even if there were no prior incidents – and even if the establishment itself does not necessarily attract criminals. The fact that the business is located in a neighborhood known for criminal activity may be enough to establish negligence and liability.

Along with medical bills and missed wages, there may be considerable non-economic damages associated with a violent assault. These non-economic damages represent emotional and mental issues, such as PTSD, anxiety, depression, and more. Rest assured that you can receive compensation for these damages in addition to your financial losses.

How Can You Recover?

Most people assume that assault victim can recover only from the person or persons who caused their injuries. Owners or managers of the property, however, can be held liable if they failed to provide a reasonably safe environment for the public. For example:

Of course, there are many other instances where a property owner could have prevented a physical attack. Perhaps your hotel had defective locks or perhaps a store lacked security cameras. In each of these situations, it could be proved that the property owner acted negligently and failed to provide a safe environment for the public. As a result, you could be entitled to significant compensation if you sustained injuries from a physical assault on another’s property in San Francisco with the help of a lawyer.

Certain areas are more prone to physical assaults than others. They include:

How a San Francisco Physical Assault Attorney Could Help

If you were injured after being attacked in a bar, restaurant, hotel, or another establishment, discuss your rights with a San Francisco physical assault lawyer. You may also call to schedule your initial consultation and to learn more about our personal injury services.