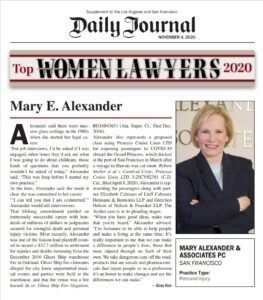 The Daily Journal announced its annual Top Women Lawyers list and once again, firm founder Mary Alexander was recognized as one of the top female attorneys in California.

Ms. Alexander has had a remarkable run over her career and over just the last two years she’s obtained some amazing results. In July, as liaison counsel for the plaintiffs, she announced a $32.7 million settlement had been reached in the first portion of the Ghost Ship warehouse fire litigation. This was the latest in a long line of eight- and nine-figure verdicts and settlements she’s obtained for her clients. For over 30 years, Mary Alexander has earned a national reputation for her work protecting consumer rights, winning the respect of clients and colleagues alike. As a pioneering female trial lawyer, Ms. Alexander is a past-president of both the Association of Trial Lawyers of America (now known as the American Association for Justice or AAJ) and the Consumer Attorneys of California (CAOC) and has been at the forefront of some of the state’s most prominent litigation. She assisted the D.A. in the criminal case resulting in recent convictions. She is in the leadership of the North Bay Fire cases, representing four of the death cases and many who fled for their lives and lost everything.