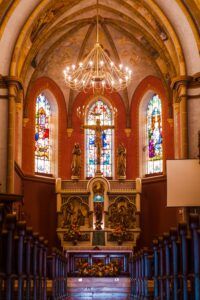 Sonoma, CA – November 3, 2021 – Mary Alexander & Associates filed a lawsuit on behalf of “John Doe RM,” a man born in 1964, alleging that he is the survivor of childhood sexual assault and abuse at the hands of a Catholic priest.

According to the complaint, Plaintiff John Doe RM was sexually assaulted by a priest from 1977-1979. The priest befriended Plaintiff and gained Plaintiff’s trust as a spiritual mentor. The priest used his position of authority to “groom” Plaintiff and to later commit child sexual assault and abuse of Plaintiff.

The abuse allegedly took place at the church, including in the rectory, as well as at a hotel in San Francisco, CA.

The predator priest had a history of committing sexual assault on children, and the religious institutions he served failed to warn anyone of his behavior. Instead of punishing the priest, defrocking him or interfering in any substantial way, the priest was allowed to continue to abuse, harm and manipulate children entrusted in his care.

The complaint also alleges the religious institution was aware of the priest’s harmful behavior and covered it up, allowing the priest to continue to molest and harm children.

To protect the privacy of the innocent, the names of the plaintiffs are kept anonymous.

Due to California law, the names of the defendants are kept anonymous.

Mary Alexander & Associates has been successfully fighting for its clients for years. Our attorneys have handled various child sexual abuse cases, winning millions in verdicts and settlements for our clients. These include a $13 million judgment for a child molested by a sports coach, a $2.5 million settlement for a teenager abused by a schoolteacher, and a $1.1 million settlement for an elementary school child abused by a clergy member. To learn more, go to: https://maryalexanderlaw.com/san-francisco-clergy-abuse-attorney/.